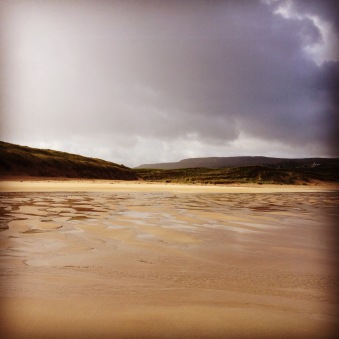 When I take my walk at low water I find the beach potholed. Puddles everywhere. The dog falls behind, his shadow gone from my side, and when I turn, he is sniffing the sand. He dips his nose, shakes his jowls. Usually Tone’s treasures are dead things. Seagull wings, old rabbit bones. But today there is something in the toss of his head that makes me turn back.

I’m not well acquainted with fish species. I might recognise a bass or a mackerel because I’ve seen those sucked into plastic in supermarket chiller cabinets. It takes me a moment to even spot this one, on a bit of sand dug over with Tone’s scrappy paw marks. It’s only four inches long and terribly thin. We watch it convulsing – too small to see its lungs heave. And I’m thinking sprat. Only sprats are steely blue, whereas this is pale, pale silver. As quickly as Tone grabs it up, he spits it out and does a little dance. ‘Wimp,’ I tell him.

I look at the huge expanse of beach, the sea so far away. It will be five hours until the tide rescues the stranded sprat. I think about picking it up, but the thread of its life is so close to snapping I can barely look. If I touch it, if I accidently twine the thread in my clumsy hands, I too might struggle for breath. With spring’s imposter driven off and a return to cloudy skies, I’m still carrying sheepskin mitts in my pockets and I pull these out and take the fish in padded fingers. The gloves are drool-stained and sandy, the sprat a thin line of light. It’s while I’m hopping between puddles, gloves cupped and a euphoric Tone at my side, that I stare into its upward facing eye. It is stoically unmoving, a trick perhaps of its lidlessness. (Or has the fish already suffocated in my glove bath of rough air?) I’m startled by the lack of pigment in the iris. It isn’t yellow nor amber nor grey but the same pale silver as the scales, as though the whole is camouflaged for some moon landscape.

It is this detail that helps me identity it later when, damp gloves propped on the radiator, I google images of small fish. But the sound of its name falls flatly from my tongue. It occurs to me now that had I held it in my bare hands, I’d have better felt its weight, been able to gauge its stiffness; I could have run my thumb along the dorsal fin and the too-smooth-looking body.

Instead I ran the length of the beach with my gloves on, and left the sand eel under the silver cover of gently breaking waves.